Video presentation of the book by the author 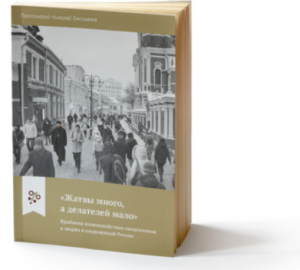 The results of sociological studies (the Institute of Socio-Political Research of RAS, Russian Public Opinion Research Center (VCIOM), Public Opinion Foundation (FOM), Levada-Center, etc.) show a significant gap between those who identify themselves with Orthodoxy (according to various surveys, between 60% and 80%) and practicing (church-going) Orthodox Christians (according to various estimates, with 3% to 15% of the population regularly attending church services, going to confession, and taking communion). Moreover, one can observe monotonous growth of the share of population, who consider themselves Orthodox since 1991, while the percent of people taking communion monthly or more often was stable on the level of 3 percent during all these years. This gap illustrates the main paradox of religious situation in contemporary Russia. 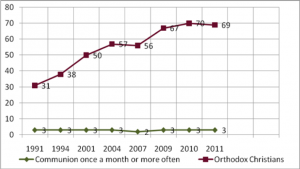 The monograph elaborates a new religious studies methodology consisting in the domination of two approaches: where religion is seen as worship (religious demand) and where it is seen as the interaction (religious supply) between clergymen (priests) and laymen (believers). The developed model of religious interaction allowed performing the quantitative assessment of the religious supply in modern Russia based on the data of the Russian Orthodox Church. To validate the said theoretical model experimentally, the empirical data provided by a quantitative empirical study “Fifty confessions of Moscow parishes” and field research conducted by the Sociology of Religion laboratory of the St. Tikhon Orthodox University (STOU) in 2003–2017 were used.

The results of the study make one question the veracity of Russia’ ever-growing secularization and see the current religious situation in Russia from a new perspective. The publication contains diagrams and charts as well as various appendixes.

This monograph can be found useful by various specialists in religious studies and State-Church relationship, representatives of the Church administration and any other readers interested in the interaction between modern society and religion and the role of the Russian Orthodox Church in modern Russia.

Emelyanov Nikolay. 2019. “The Harvest Truly is Plentiful, but the Laborers are Few”: The Problem of Cooperation between Clergy and Laity in Contemporary Russia. Moscow: PSTGU.