The project is dedicated to the study of values ​​and worldview of young adults today in relation to religion, historical and cultural context of each country.

During a whole week the project leader Peter Nynas and colleagues from Finland and Sweden introduced international group of researchers to the theoretical assumptions of the project, presented their previous investigations, as well as held seminars with the discussion of methodology and tools, planned to be used for data collection. Each of the participants several times run through pilot interviews both as an interviewer and as a respondent which was helpful to get to know the research tools =, designed specifically for this project , — in practice. 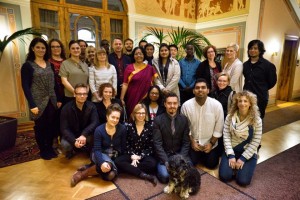 Following the first meeting and personal acquaintance researchers from all over the world have come to a common understanding of the most important nuances of the upcoming collaboration.

The next meeting is scheduled for June 2016, in Helsinki, at the conference of the European Association of the Studies of Religions (EASR), where representatives of countries will present the results of the data collection and will be able to discuss further joint steps.

Formed composition of the participating countries is a nontrivial one, which guarantees the uniqueness of the data. Taking into account that the study will be carried out identically in each country, YARG-project promises many discoveries in a field of comparative analysis of religions.